Posted on September 2, 2012 by transitiongirl

This morning I spoke to one of my favorite yoga buddies, Crystal, a lovely California girl and fellow ‘yoga dork’ I met during my month-long yoga training in Greece. I mentioned to her how I’ve been feeling like I’m in constant transition for the past few years.

Sometimes this feeling is exasperating! But at the end of the day, it also means that I’m constantly evolving, with some inner force always nudging me, encouraging me to try new things, challenging me to step outside my comfort zone. You never know what you’ll discover!

It’s hard to take stock of it all, but wow, if I look back over the past year, I’ve achieved so much! On top of maintaining a hefty pace at my United Nations job in Kosovo, I’ve also managed to:

Now, on one hand, I think – this girl deserves a break! And yet, I’m still transitioning – towards what, I’m not quite sure, but I see limitless opportunities on the horizon. It’s all quite scary but what my yoga has taught me, not to mention my awesome personal coach Jana (yes, sometimes we all need one!) is that confronting your fear, or rather embracing it, means that you can open and enter through new doors only to discover new, fulfilling, and mind-blowing opportunities for personal (and professional) growth.

So bring on the transitions, I say!

And I ask you, what transitions are you experiencing? How are you approaching them? With fear, excitement or both?

A Change Is Gonna Come

Posted on February 19, 2012 by transitiongirl

After all, there is a reason behind the name of my blog, Transition Girl. Yes, I’ve been trying to find the path in life for me that feels right; but of course, life will always be full of changes and transitions.

In the meantime, let’s keep the faith and remember that change is gonna come 🙂

Inspiring yoga videos… and knowing not to take yourself too seriously

Posted on January 26, 2012 by transitiongirl

You know all those videos, themed Sh*! ‘people’ say? The kinda stuff girls, yogis, Asian mothers, Italian nonnas, Arab fathers say etc. I recently came across two such videos… ‘$hit new age girls say’ and ‘$hit yogis say’. Scarily enough I see some aspects of myself turning in that direction… and that while living in Kosovo with only 1 or 2 yoga teachers actively teaching; I can only imagine what I would be like if I were living in Vancouver or California!

But back to the serious beauty of yoga – this Equinox video with Briohny Smyth, a Thai-Australian yoga instructor, just blew me away. The music is fantastic too. All of it, sheer beauty.

And, yet, apparently it caused some controversy because she was in her knickers, but hey, at least someone has a sense of humor and did a ‘cover version’ so to speak …

But my favorite, inspirational yogic video in a long time: the December Yoga Rave in Vancouver organized by Lulu Lemon and inspired by my Kundalini yoga teacher, Gloria Latham. Yes, she’s the one at 1:26 mins flashing that gorgeous smile. Gloria is an amazing person and teacher and you can see in the video just how much she energizes and inspires the crowd – I LOVE IT! The video makes me want to organize a yoga rave here in Kosovo (maybe next year once I’ve completed my yoga teacher training).

Giving Thanks in the midst of sadness …

Posted on November 27, 2011 by transitiongirl 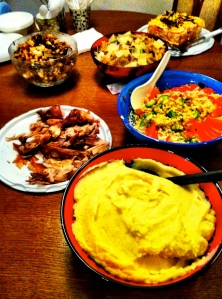 I spent 13 years living in the US of A but never really appreciated Thanksgiving until this year, 12 years after leaving the States. I don’t really know why… except maybe I do!

Just a few a weeks ago I flew to Rome to give a eulogy at the funeral of my colleague and close friend. She left us too soon.

I wouldn’t classify myself as Christian, but I am spiritual that is for sure, and watching the Catholic funeral rite, I realized how much I appreciate the importance of having some kind of ritual to send off our loved ones to the next realm, whatever and wherever that may be. Death is so frightening to us, because we, those of us left behind, feel insecure and afraid: what is next, where do we go, what happens to us ? Sitting in the Roman church, listening to the sermon gave me more comfort than I have experienced in any religious ceremony lately. At least we are not alone in feeling this fear, and the funeral rite, not only the Christian or Catholic one I am sure, reminds us of this.

Later that week in Istanbul, I felt compelled to visit a church and light a candle in memory of her, and also one in memory of my mother. The soft flickr and light of the candles in the dark church warmed my heart.

Fast forward two weeks : It’s Thanksgiving in Kosovo and I am invited, together with my father, who is visiting, to join our Japanese-American friends for a Thanksgiving dinner. I was so relieved to be able to join close friends around a ritual of thanksgiving. I gave thanks to my friendships, my family, each moment of joy that life brings, even in the midst of pain, sadness, grief and despair. I never want to stop  seeking out those specks of light, warmth and love, and this year’s Thanksgiving reminded me of the importance of doing so. From now on, wherever I am, I will honor this lovely holiday each year.

Soothing blessing to help the transition from life to beyond …

Posted on November 16, 2011 by transitiongirl 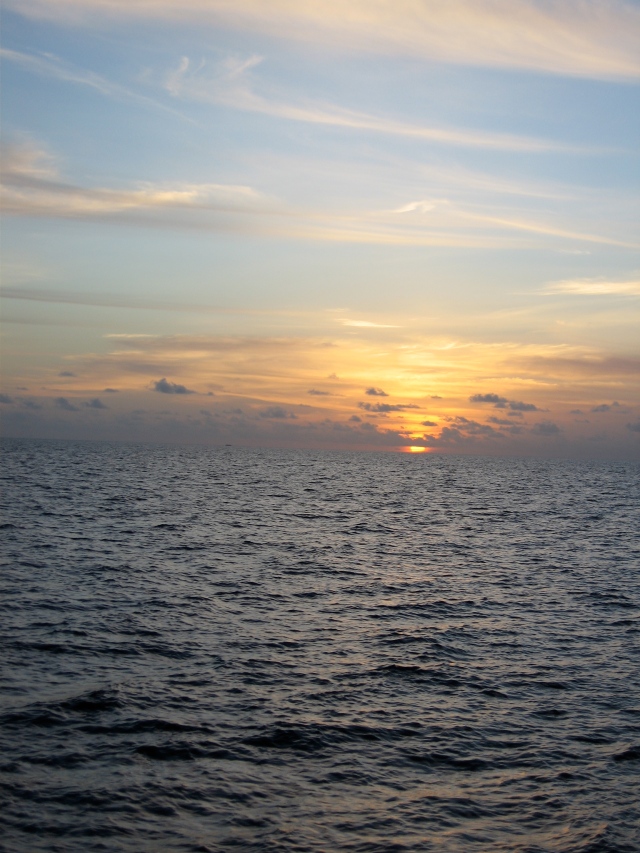 A morning in my Kosovo apartment

Posted on October 30, 2011 by transitiongirl 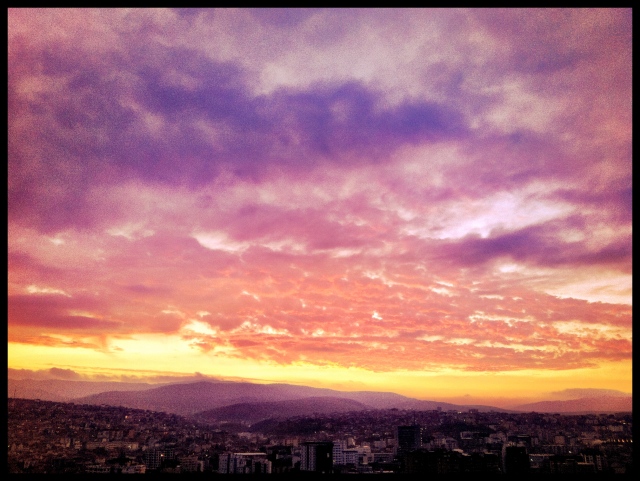 Posted on October 23, 2011 by transitiongirl

Sunrise in the Far West District of Achhan, Nepal

My friend Paula is an HIV specialist who has worked in Romania, Maldives and now Bangkok. As part of her current job, she travels to many countries in the region providing technical assistance to different programmes in terms of HIV prevention, especially amongst women and mothers. I know she has seen a lot, and knows the subject as an expert, but being an expert doesn’t necessarily mean, of course, that we are more or less detached from other people’s experiences. She sent me this passage as a suggested first guest post for my inspirational Mondays… I found it perfectly suited and it reminds us that especially people who are suffering extreme hardships are the ones who can offer us the most inspiration:

“Today I found my inspiration in an unexpected way. By meeting 14 Nepalese women. All living with HIV. Most of them were infected by their husbands, migrant workers in Mumbai, who – besides money – brought home the virus too. All are poor. Most of them are widows and the main caretaker of their families. All have a story to tell. All have walked the path from bitterness to faith. Some of them are talkative, while some are just quietly sobbing. But all have learned how to cope with stigma and discrimination. I’ve listen today to 14 stories. Stories of love and pain, support and abuse, anger and hope. Stories of 14 women. Strong, beautiful, inspirational women.”

Paula was inspired by the 14 survivors… I was too, and hopefully you will be as well.

The Girl Effect and Peace in Kosovo

Posted on October 11, 2011 by transitiongirl

I sat in a meeting with local and international partners to discuss women’s (and girls’) security issues in Kosovo. It was the usual kinda stuff: reviewing a report together, discussing a donor proposal, updating each other on the activities we’re involved in to promote gender equality. One international partner brought up the ongoing border conflict in Northern Kosovo, where Kosovo Serbs are blockading the border in protest of the Kosovo government’s trade embargo on Serbia. Politics aside we discussed the importance of women being present at the border to be part of the day-to-day negotiations to stop violence from flaring up.

You see, the UN Security Council unanimously adopted Resolution 1325 in 2000. Among other things, this document recognizes the distinct impact of war on women and girls, and their unique role in preventing conflict.

Why were 30 or so women and one token man sitting around the table debating how to prevent conflict at the border, within the context of this resolution, when up at the border itself, international peacekeepers, mostly if not all men, seemed to be ignoring it themselves? Well, we could get into a lengthy debate about the lack of gender sensitivity in peace keeping missions etc. etc. But, surely, women and girls can have a positive ‘effect’ on preventing conflict at a border, even if the European and international officials still have not recognized the importance of the ‘girl effect’ in peace keeping.

The debate has stuck with me for days, especially considering how international institutions often fail to meet the human rights standards they’ve put in place themselves …. Yes, yes, there is another more complex debate about the ethics of international aid/development, but let’s leave that for another time, another post.

As I planned in my mind to write this post, it was announced that three women won the Nobel Peace Prize. It gives us hope that the ‘girl effect’ and the crucial role women and girls can play in peace-keeping efforts is beginning to be recognized, if not in Kosovo by European and international actors, then at least elsewhere.

This post is part of the online blogathon initiated by Tara Sophia Mohr to raise awareness about gender equality. You can learn more about her blogging initiative here to join in, and also about the wider Girl Effect campaignhere.

Posted on September 29, 2011 by transitiongirl

While I’ve always believed in telling the truth, I haven’t  thought about what it really means in concrete terms. And, while we’re taught to ‘tell the truth’ from childhood onwards, we also learn that sometimes the truth can be painful, that sometimes it’s better to hide or avoid it, in order to save someone’s feelings from getting hurt.

Since the moment I found out my mum died, I stopped thinking about the truth in that way. The raw pain I was experiencing drowned out everything else, I didn’t have a choice but to share my truth, the truth of my mum and how she died, the truth of my pain.

Now, each person will have his or her own unique way of grieving the death of a loved one, that is for sure. For me, the way I coped was to speak the truth, to share my feelings, to process them and let them out into the open.

While I inherently knew that some would feel uncomfortable (who likes talking about death anyway ?), I would always preface my ‘outbursts’ with statements like,  “you don’t have to feel bad”, “death is a normal part of life”. Death and dying is a common human experience after all that we will all experience, if we are lucky ! (meaning, if we outlive the ones we love).

So I spoke the truth, and sharing my pain is what has helped me survive.

Posted on September 26, 2011 by transitiongirl

From all those countries where I grew up and have lived in, I’ve learnt one important thing: No matter where you are or who you are with, there is always something beautiful that you can find and appreciate. These are the aspects that made me fall in love with every country I’ve lived in: Denmark, America, Palestine, Pakistan, Maldives, Italy, Kosovo.

On a recent morning I fell in love with Kosovo a little bit more – the natural landscape is beautiful here, the people are so warm and hospitable, and yes, there is even beauty in Pristina’s city-scape…